Although numerous languages are currently being used to develop games, C++ remains the standard for fabricating expert libraries and tool chains for game development. This book introduces you to the world of game development with C++.

By the end of this book, you’ll be ready with 3 compelling projects created with SFML, the Vulkan API, and OpenGL, and you’ll be able take your game and graphics programming skills to the next level.

The book “C++ Game Development by Example” is available for purchase at: 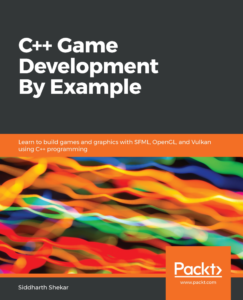